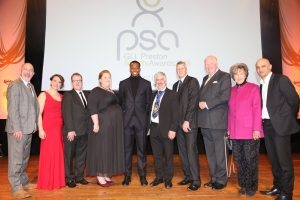 WNJ has once again helped recognised the people who make sport happen in the Preston area at a very special evening of celebration.
We sponsored the Secondary School of the Year category in the annual GLL Preston Sports Awards.

And we were delighted to hand over the award to the worthy winners, Ashton Community Science College, at the event held at Preston Guild Hall.

WNJ has helped support these annual awards for a number of years now. This year was the 13thevent and it has become are one of the highlights of the city calendar and a chance for the sporting community of Preston to come together.
They showcase the achievements of our local athletes as well as the army of unsung volunteers who dedicate so much time to their sports. As always it was a memorable and inspirational evening.

The event was hosted by Granada TV presenter Paul Crone and there was an inspirational speech from double Olympic medallist Lutalo Muhammad.
As a Preston-based business, we were pleased to sponsor one of the major awards of the evening, which recognises the hard work of local schools and their nurturing of our young sporting talent.
The awards are very-much community orientated and it is great to be able to support them as they recognise the thriving grassroots sport in the city.
As well as sponsoring one of the awards, we also hosted a table at the event and an enjoyable evening was had by everyone.
The event really highlighted all the great work been done locally in a massive range of sports and it really celebrated the unsung heroes who put in so much time and effort.

The event was opened by a spectacular display from the winners of Preston’s Primary schools’ dance festival St Mary and St Andrew’s Primary School.
Paralympic swimmer Stephanie Slater was presented with some flowers to congratulate her on her achievements in her career after the recent announcement of her retirement.
Longridge’s internationally renowned football freestyler John Farnworth, fresh from a ball-juggling walk up to Mount Everest Base Camp, was presented with the Pride of Preston Award.
And Marilyn Gregson was rightly recognised for her dedication, enthusiasm and involvement in disability sport through her voluntary role at Preston Panthers Disability Club for more than two decades.

Promotions as WNJ looks to the future
Scroll to top